I heard about this gem early last winter, during facet season, when I asked around at the shop as to whether or not there were runnable trails here in the winter. I was met with blank stares then someone finally chimed in with “The Bonneville Shoreline Trail” which was stated as more of a question than an answer. As if saying “You mean aside from the BST trail network that features dozens of easily accessible, low elevation trails?”

Alright alright, it sounded good but I wondered where it actually was. If it was anywhere near the Great Salt Lake, I knew for certain that I wasn’t getting in my car to drive all the way out to that toilet bowl to run. A quick search on my pocket computer and I was reminded that the bowl used to hold A LOT more water and I wouldn’t have to run alongside brine shrimp and funky smells.

So what used to be a lakeside jaunt for cavemen, is now an elevated path that traverses the big mountains and goes up and over the smaller foothills. It’s a “choose your adventure” kinda trail that avoids the mandatory big slogs but still gets you plenty of vert, if you choose.

More research at home revealed the BST will someday be a much lengthier affair that will stretch from the Idaho border all the way south to Nephi. I doubt this will happen in my time, or any time, but a bit more connectivity with the trails already in place would make point to point long runs superb, which you can still do with a little road time.

That said, almost a year later, I’ve now had the pleasure of putting in hundreds of miles on various portions of this very accessible stretch of mostly dirt. Off all the stretches I’ve run, here are my top three BST jaunts, so far.

1. The section from Hidden Valley to Corner Canyon is my favorite. It’s the smoothest single track trail, dotted with just enough rock to keep it interesting, and the dirt tastes of the money in the neighborhood. There is a suspension bridge and some massive boulders that give the illusion that you’re passing through a tunnel. I haven’t veered off and up into the Lone Peak area or any other side trails but mean to. I tend to simply use this section as nice and easy out-and-backs. It really is a pleasant stretch of trail both visually and on the feet.

2. My go-to section is near the University of Utah which evidently is also popular with the “I’ll pick up my doggie bag on the way out” crowd. Sometimes I’ll even start in City Creek, push eastward to I-Street Trailhead and go from there. What’s great about this area is the amount of vertical gain - or not - and the mileage one can get without having to repeatedly run the same trail. Unavoidable monotony during exercise is death. At the southern end of the section, which is ~13 miles long and stretches from North Salt Lake to Emigration Canyon, is a parking area complete with facilities and numerous options with which to start your run.

Another option for the vertically inclined is to link up Mt Wire with Van Cott as a loop which comes in around 11 miles with 4k of gain. You could park at the Natural History Museum of Utah and run upwards of 15 miles, never step foot on the same trail, and never really be more than two miles from your car. This tidbit of info is great for planning emergency exits should you get hungry, tired, a storm rolls in, or you lose track of time and need to get to work 10 minutes ago.

3. The stretch on the flanks of Mt Olympus over to Heughs canyon is almost too short to warrant the drive, depending on where you’re coming from. However, the beauty of this section lies in the vertical pushes you can get via this BST access. Side trips up Heughs canyon and Mt Olympus definitely get you a few more miles and as much vert as you could ever want. The trip from the BST up Heughs is short and steep and ends with a little boulder hopping to an early season waterfall. Worth the visit at least once and I’m told past the falls is cougar country. The main hiking trail up to the top of Olympus is four miles and 4k’ of steep trail.

Overall, the Bonneville Shoreline Trail is a fantastic network that certainly adds a lot of value for Wasatch trail runners. Several sections are super close to home and more importantly, I’ve been able to get miles done in any month. Midday summer runs are brutal but running the BST at night is a treat in itself with cooler temps and views of the valley lights. And it’s still game on in winter, even when it’s a-stormin’ up high or avalanche conditions are sketchy. And when it does dump in the valley, it’s usually packed out pretty quick from traffic so some La Sportiva Blizzards, Dynafit Sky Pros, or Black Diamond Distance Spikes would work well to keep you moving. Personally, it came in clutch for me last winter when the ski season stalled out there for a minute.

I find it incredible that I can drive a few miles from home in South Salt Lake, start on the BST, and run downtown for tacos and ice cream with minimal time on road. I haven’t actually done it yet but it’s on the shortlist. Any takers?

Interview with the Filmmakers of Rite of Passage 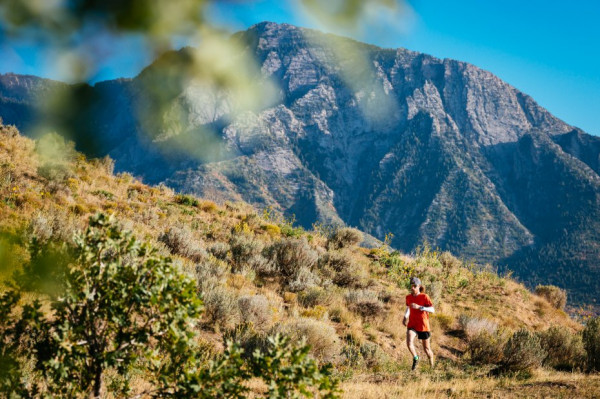