6/21/2022 What Backcountry Skiing Can Teach Runners

I’ve never been an especially strong runner. Okay, maybe I wasn’t an average hobby jogger, but next to the most dedicated denizens of the trail and roads, I didn’t have the wiry frame or dogged commitment needed to be remotely competitive. And though I enjoyed the gnarled, wooded trails of New England, I faltered on hilly cross-country races in favor of the predictable surface of an 800 or 1500-meter mad dash on the track.

During the early days of coronavirus, I dragged myself out of the house a couple of afternoons per week, mostly to remedy the blurry dissociation of endless Zoom meetings. With few races to look forward to and training partners scarce, my motivation reached new lows. When I couldn’t even summon the energy to head out for a half-hour run, I resorted to abbreviated bodyweight workouts from the living room of my apartment. Pitiful, I know.

This winter I moved to Utah to join the Skimo Co team, where new mentors and training philosophies sparked a renewed zeal for mountain movement. Though many of the lessons drawn from skiing might be old news to longtime mountain athletes, they were enough for me to see the sometimes questionably enjoyable sport of running in a new light. Here are a few of those takeaways:

Learn from the Environment

Skiing in the backcountry demands careful attention both throughout the season and over the course of a single excursion into the snow—not only because of the constant fluctuations of avalanche danger, but also to have a decent time when you finally point the skis downhill! Avalanches do exist in New England, but they are less omnipresent due to mellow slope angles and a snowpack generously characterized as “consolidated.” In Utah, I quickly picked up the habit of religiously checking the morning avy forecast and seeking daily counsel with seasoned locals in order to avoid crowds, locate protected glades, or perfectly time a corn cycle. Out in the field, I studied the snow as it reacted to the environmental forces conditioning it against the topography of the mountains. While runners don’t have to walk the same tightrope to avoid a snowy grave, the additional context collected from habitually assessing slope angle, solar aspect, elevation, and recent weather trends can be the key to avoiding overexposure to the sun, swollen river crossings, or other unexpected hazards.

Beyond safety concerns, as trails opened for springtime foot travel, I had a new appreciation for the vernal streams, ephemeral wildflowers, and the like that had until recently been obscured by snow. I was reminded of The Pilgrim at Tinker Creek, a book in which author Annie Dillard inhabits an Appalachian landscape over the course of the year, documenting the patterns connecting tiny life forms with the overarching character of the land.

The work that goes into finding a ski partner also pays off when it comes to finding a running partner. While it’s easy enough to pair up with someone of roughly the same speed to run with, ski partners must also share an eye for worthy objectives and safety procedures. A season or two of winter travel together tends to cement relationships based on mutual respect and shared goals. After all, if someone proves themselves reliable enough to trust with your own avalanche rescue, it’s easier to trust them to show up on time and communicate other needs as they arise. This in and of itself was a revelation after years of managing friction with capricious running partners. The litany of obstacles encountered in the winter also requires runners to tune up broadly useful mountain skills such as hazard assessment, pacing, nighttime travel, and self-arrest. Running out of water and slicing my shins on early-running-season postholes, I felt more confident pulling off a quick exit plan with my running partner after negotiating far spicier challenges on skis together.

Speaking of goals, the relatively private atmosphere of the backcountry, plus the obvious dangers of rushed decision-making, redefine success in terms of mountains reached and the ever-elusive “style points” against arbitrary measures of speed. This isn’t to say that humility always prevails, as Strava and Instagram have a habit of distorting even the best-laid plans. The point is that skiing can reinvigorate running with an eye toward creativity and exploration. Instead of vaguely hoping to stack 50-mile training weeks this summer, my thoughts have drifted toward how to pull off a fastpacking route in the Wind Rivers, a single-day traverse of the Presidential Range, or simply following a local ridgeline deer trail until I reach its high point.

Long touring days at medium-intensity above 6,000 feet also yield incredible benefits when it comes time to lace up the running shoes. Unsurprisingly, I found a deeper reserve of uphill climbing strength and am less intimidated by steep running ascents. Likewise, it turns out that the nuances of hydration/nutrition, layering, and route finding are all trainable skills honed on skis. My daily training runs have practically doubled in length as I adjusted the paces lower and brought along useful nutrition, both products of a season in which the average ski tour was several hours.

From an equipment perspective, running is blessedly simple. Grab some shorts, shoes, maybe a hat, and start truckin’! However, when it comes to tackling longer adventure runs, things aren’t always that straightforward. By nature, I gravitate towards simplicity. When asked on my first day of work, I had to scour email receipts to remember the names of my own skis and bindings. I’ve also been known to use a single pair of running shoes on both trails and roads, well past their expiration date, and to this day use a $20 Timex to skip the hassle of learning how to operate a smartwatch. While I wish this were an extension of a philosophical commitment, more likely it’s an avoidant habit I use to cope with the consumerist overwhelm of modern life. There are definitely worse neuroses to have in this day and age, but this approach to gear was still something holding me back.

Whatever the case, I had an epiphany of sorts upon replacing my decade-old pack with the Camp X3 Backdoor. It streamlined my skin-to-ski transitions, hydration, and avalanche systems, and made my back way less sweaty to boot. To draw upon another literary reference, I was reminded of the tension between the “classical” and “romantic” in Robert Pirsig’s Zen and the Art of Motorcycle Maintenance. Perhaps there was simplicity in deep knowledge of effective, versatile materials, rather than a superficial knowledge of whatever I already had laying around. If I saw such an immediate improvement from a simple pack swap, what else was I missing out on? Ultimately, specific upgrades borrowed from skimo such as light adapting sunglasses, poles, and versatile layers may very well help runners move more efficiently over technical terrain, but an overall mindset towards mastering the use (and repair!) of light gear with multiple applications is perhaps the most valuable takeaway for runners.

Running obviously has plenty of relevance for skiing, too, as we’ve reported upon previously. Above all is the ability to just get out the door. Yes, there’s something to be said for listening to your body when you encounter resistance, but I know firsthand that it is easy to mistake this healthy habit for the inner saboteur (“The snow probably sucks anyway/I didn’t sleep enough last night”) that so frequently derails ski plans. You may be useless at work for the rest of the day, but there is little chance you’ll regret the decision to start moving. Just start moving—this is a mantra that skimo and skyrun can both get behind!

This is a cool article!
Reply to this comment: 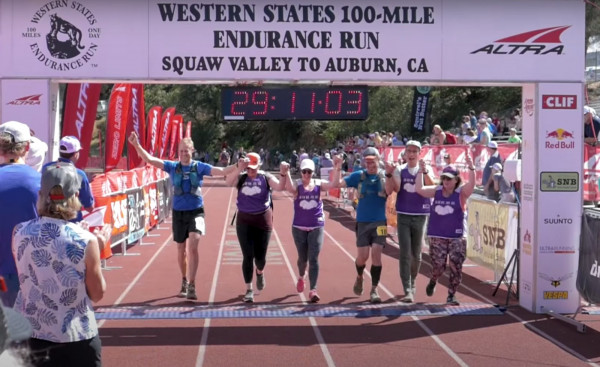 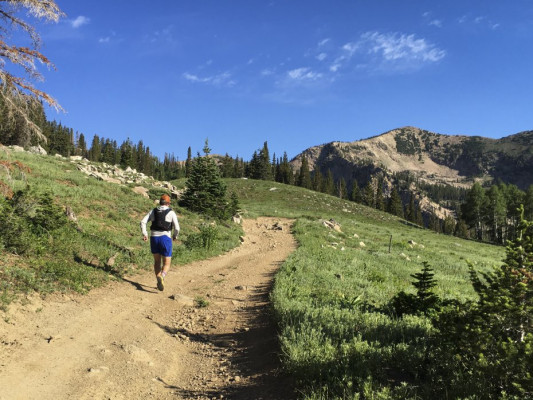