This also happens to be the song I often hum during long runs, where time really doesn’t count for anything, the landscape just seems to drag on, and the day isn’t done ‘till you reach the car.

So with that in mind, I decided to follow in the footsteps of my alpine-fiending furry role model and visit some of the central Wasatch’s less traveled summertime reaches before it’s time to hibernate again. Looking at a map, the Thunder Ridgeline seemed like a great place to aim for. Partially inspired by Noah Howell’s “Perverse Traverse” and the Dorais brothers’ “Salt Lake City Skyline Traverse,” this route would be an excellent opportunity to switch things up from the standard ridge traverses.

The plan was to start in Draper, head up to Lone Peak, traverse along ridgelines to North Thunder Mountain, and then out Hogum Fork. I, however, needed a partner who was just gullible enough to not doubt the already questionable decision of exiting Hogum Fork in the summer. But who should I call? My good pal Christian would most likely be up to the challenge. A quick rundown of the route was all he needed to be persuaded. Like my former coworker, Jeremy would say “a sucker is born every minute.” 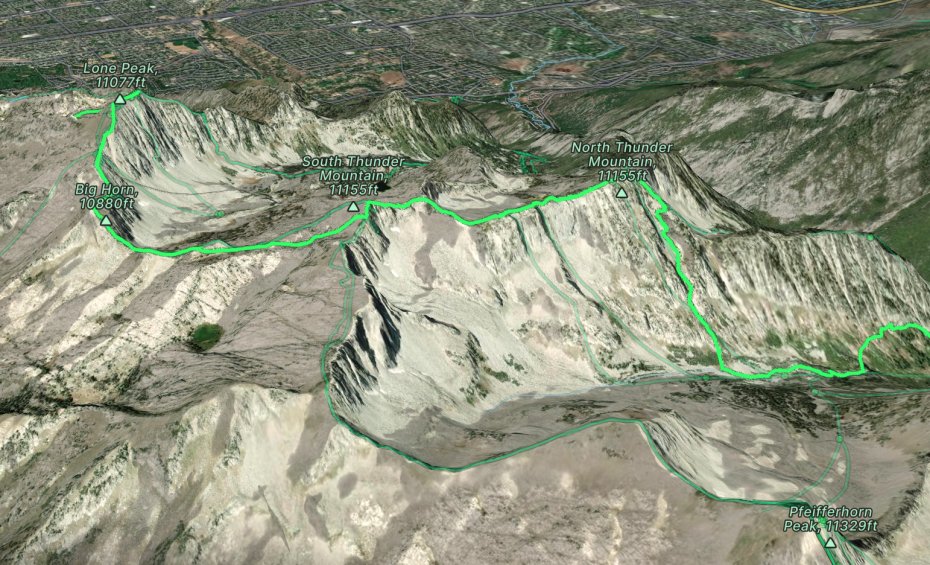 Filled to the brim with optimism, I met Christian at 4:30 am at the Little Cottonwood PNR and continued up the canyon to drop off a car across from the Y couloir. Don’t worry, we meticulously covered anything that looked of value in my car to avoid the dreaded road pirates.

Driving over to the Jacob's Ladder trailhead, water was my main concern for the day because it was predicted to be 100 degrees in the SLC that day. We brought 2.5 liters of water each and a filter for when we came across streams.

Thirty minutes after we began ascending the heinously steep trail for both of our first times, the sun began to rise and the warm breeze graced our brows. Combined with the smoke that hung in the air, the sunrise was reminiscent of being on Tatooine.

We luckily found water beneath the Lone Peak Cirque, refilled our bottles, and bagged Lone Peak - the first summit of the day. Feeling optimistic, we figured we could probably get over to the top of South Thunder in maybe 90 minutes. However, once we began, it became clear that the 5,000ft of climbing and the unrelenting sun beating down on our skin, was enough to slow down our pace drastically. On top of that, moving across Big Horn - the peak before South Thunder - proved to be more challenging than expected, especially not having climbed it from the west before.

But like the bear, we carried on to see what we could see.

Cresting the top of South Thunder, we took time to appreciate the aura surrounding upper Hogum Fork and its massive walls. It reminded me of Chamonix. If it weren’t so hard to access, this place would certainly see a lot more traffic, just for the views alone. Steadily traversing the Thunder Mountain ridgeline, the movement on the ridge was just about enjoyable as you could ask. The cruxes were short but for those looking to make things harder, there were definitely opportunities to do that. On the other hand, there were also very easy ways to escape and utilize less scary workarounds.

Of course, we stopped briefly to gawk at the top of the bone-dry Montgomery Couloir and dream of winter. Tattered webbing marked the entrance, which often requires a rappel to get into (and another rappel midway to finish the line). Maybe this upcoming season I’ll finally give it a go. Snapping out of it, we kept going past a really cool finger crack move and soon found ourselves on top of North Thunder peak, perhaps one of the least-traveled summits in all the central Wasatch. It was interesting that while the South Thunder summit logbook was now several books long, the North Thunder summit logbook wasn’t even half-filled and the entries dated back to the mid-1990s!

Gaining the top of another Hogum classic ski line - the Hypodermic Needle - we scrambled over boulders perched so precariously that they must have been put there haphazardly by the Wasatch gods themselves. By now, we were starting to really feel the fatigue and it didn’t help to know that we had nearly 5,000ft of descending beneath us to reach the car.

Awaiting us at the bottom of the Needle was our last obstacle and, in my mind, the biggest question mark of the day - the exit out of Hogum Fork. But how bad could it really be? Per the Jason Dorais blog post, we attempted to stay high on the west side of the drainage and link sections of scree to stay out of the bushwhacking nightmare.

An hour of ‘schwacking later, with still potentially hours ahead, we knew we were in the thick of it. At this point, we were also very much in the F&*k it stage so we mindlessly fought our way through the foliage. We knew we had messed up and were at an impasse when we looked down a cliff that launched the Hogum River into the abyss. Do we downclimb the river cliff or do we reverse course and head back up and around to the west? Downclimbing seemed like a suicidal mission so crossing the river up high was our best option. And just as we crossed, blazed through another thicket, and almost lost hope, we discovered a trail. At last, the gods had spared us!

A mellow downhill jaunt and rock hop across the LCC river and back to the Quarry trail is all that awaited us.

Some days it can be fun to go out and repeat ultra-classic link-ups, but other days getting off the beaten path and coming up with some random ideas can be just as fulfilling. While quite often the outcome may not be all that desirable, the act of just putting in a good effort counts just as much. Thankfully this day was worth doing and worth doing again for that matter. Maybe next time we’ll do it reverse or use a different approach.

Similar to the song “the bear went over the mountain” the bear never really comes upon anything of note, but still keeps on moving just to see what is around the next peak. Or maybe he did find some awesome lines but just didn’t say anything and that’s why the Thunder Ridgeline is so infrequently traveled. Either way, thanks for the inspiration bear. 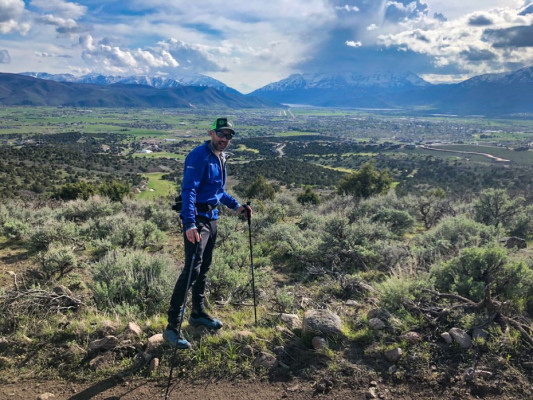 Why Finishing Last Felt So Good 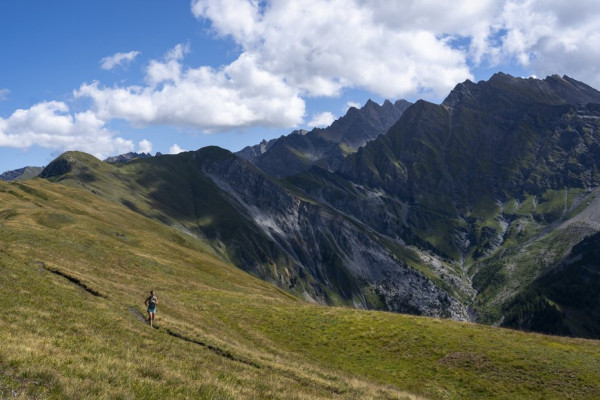